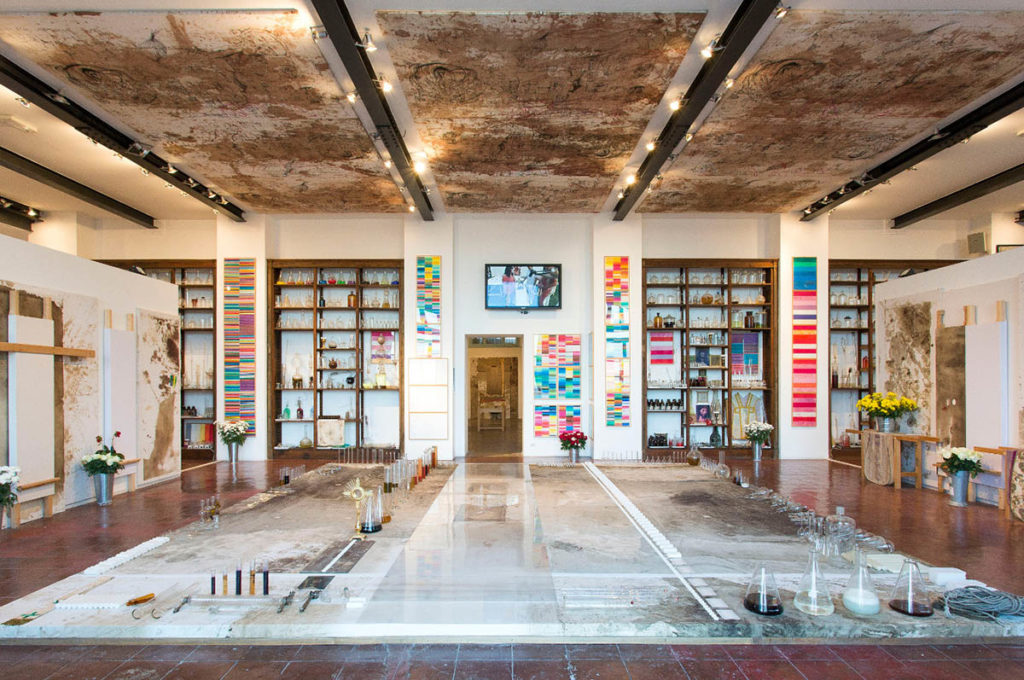 The Nitsch Museum in Naples is not only a place where Hermann Nitsch’s work is collected and exhibited; it came into being as an active cultural protagonist, a centre of critical and theoretical reflection on this great Austrian artist. The permanent exhibition takes the visitor on a kind of ideal journey through time, presenting Nitsch’s works from the 1960s to his latest productions, focusing in particular on his relicts, which despite being inextricably bound to the performance which produced them, may be seen as translations, a rewriting in a formal act which — even in the cross-contamination of materials, appears intimately and intensely pictorial. Thus, the “relict” is a work of art that comes into being within and from a work of art, in turn becoming a work of art itself. In this spirit, the exhibition hinges on the concept of works born from the Oeuvre, in the sense attributed to it by Nitsch as a unified synthesis of his work.
However, the controlling idea of the project Arena – Opere Dall’Opera (Arena – Works out of the Work), must also be understood in a different sense. In reality, an important aspect of the work with relicts is the use of tables and large pedestals on which various substances, some hot and some cold, are arranged and distributed with Cartesian precision, so that traces of blood and organic materials encounter the cool clarity of sugar cubes or the ice-cold and threatening perfection of surgical instruments. The Arena – Opera Dall’Opera installation uses space as a huge metaphorical table holding the various relicts and around which the walls create an equally ideal “arena” for the eyes, it too becoming a work of art.
In this way a dialogue is set up at a distance – but one that is intense, immensely strong and indispensable – between theatrical and visual time. It is in the very nature of the “relicts” to be a trace of something, a witness to a past event that leaves behind the enigmatic echo of its existence. On the other hand, in Nitsch’s understanding, the “relicts” of the Orgien Mysterien Theater are also an autonomous artistic and formal construction which takes the testimony of the theatrical act as its starting point, yet transcends it. The living and lived event of the actions is not documented by the “relicts”, but is literally rewritten; it is a work in itself, as theatre, but also provide the material for a new work which acts as a moment of silent reflection after the ecstatic and deafening theatrical ritual.
It is also in this way that the dimension of the totality of Nitsch’s artistic oeuvre moves. Not only is there the synaesthesia of the representative and visual moment of the spectacle, but there is dialogue on the same materials and the same poetic visions, between different expressive planes and linguistic codes. As if to enounce the same thought, the same experience first in words and then in silence.
Lorenzo Mango
Translation by Adrian Bedford 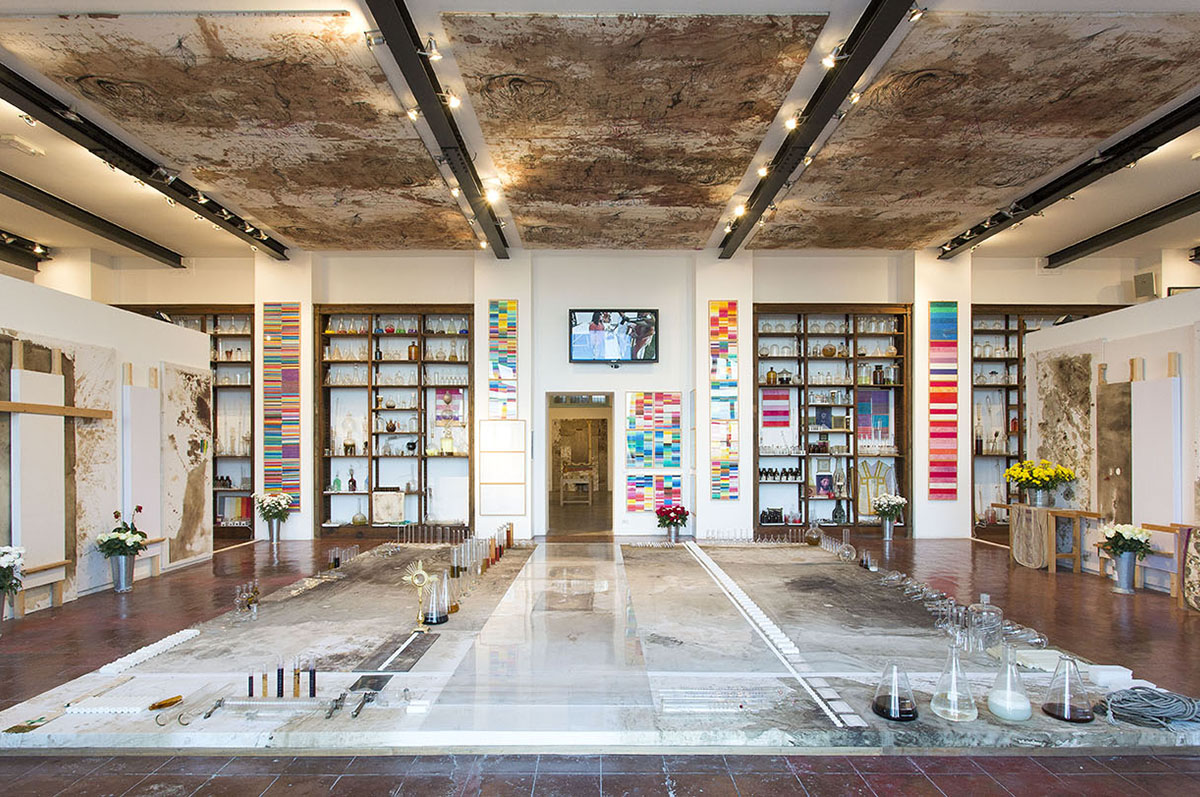 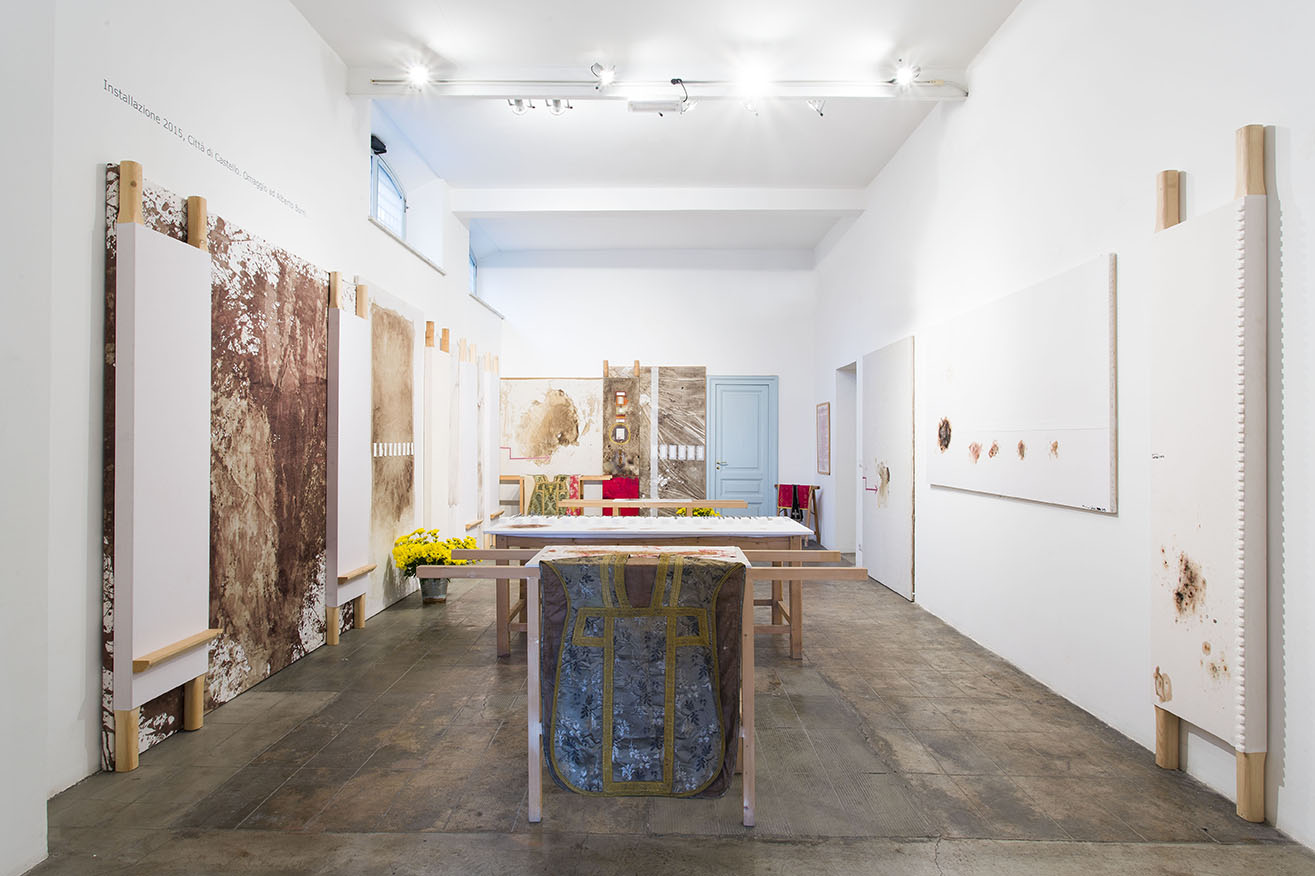 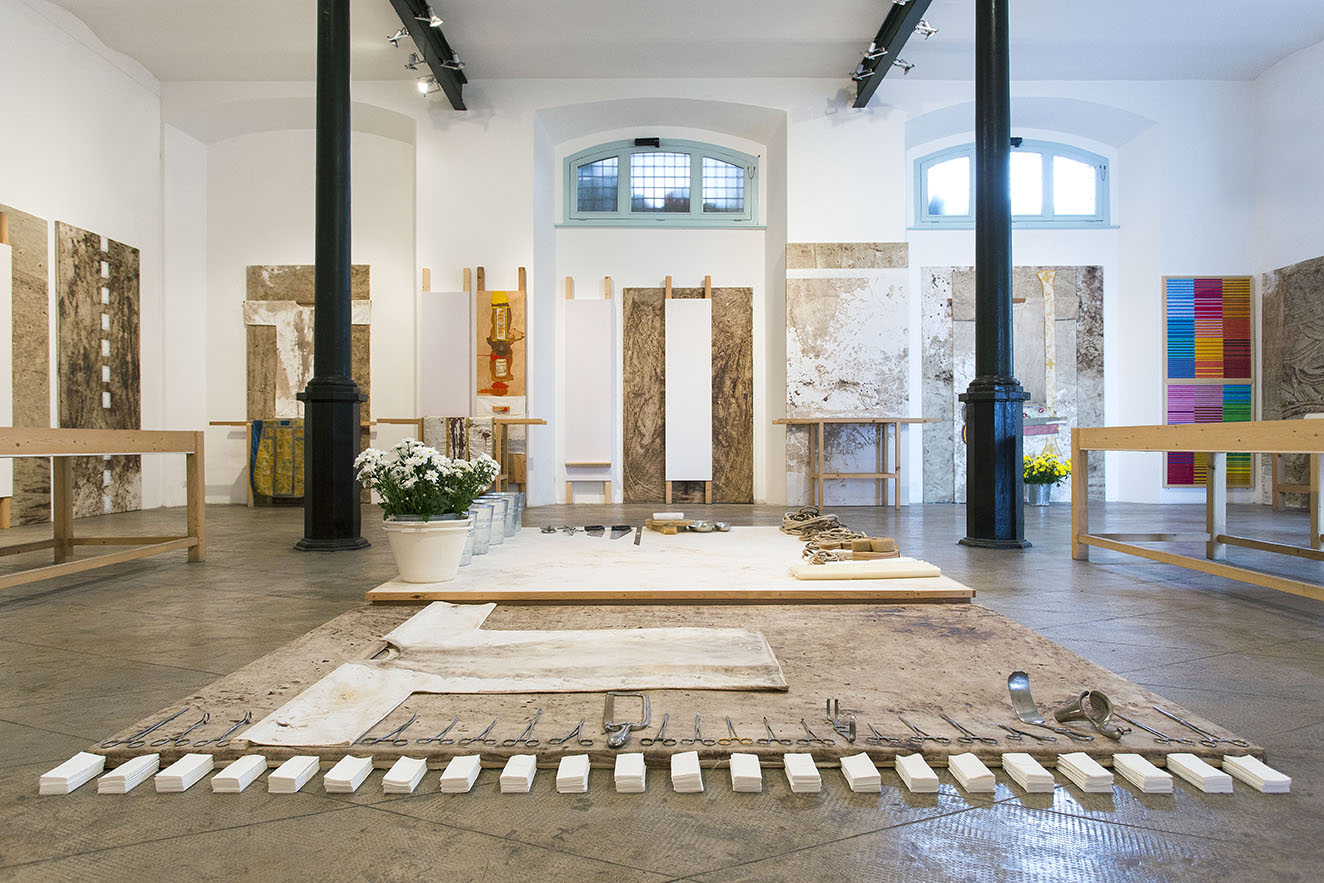 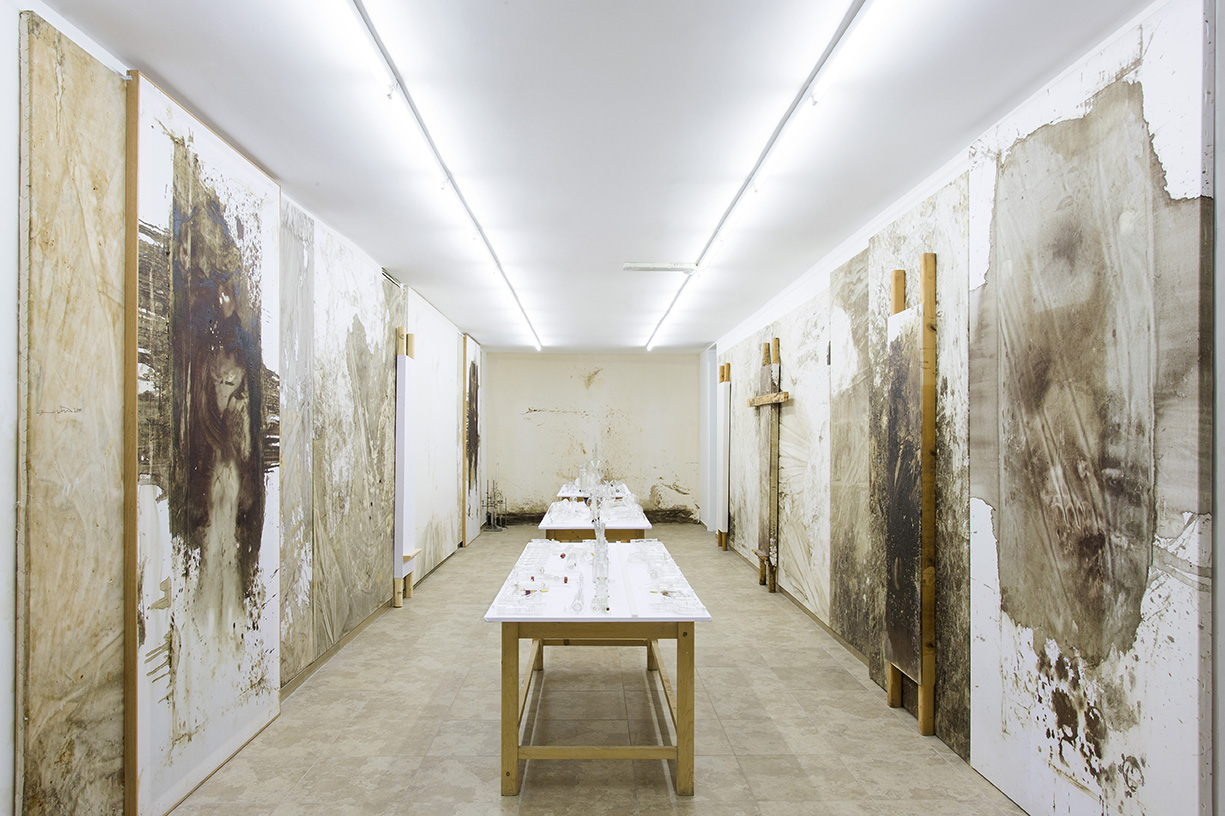 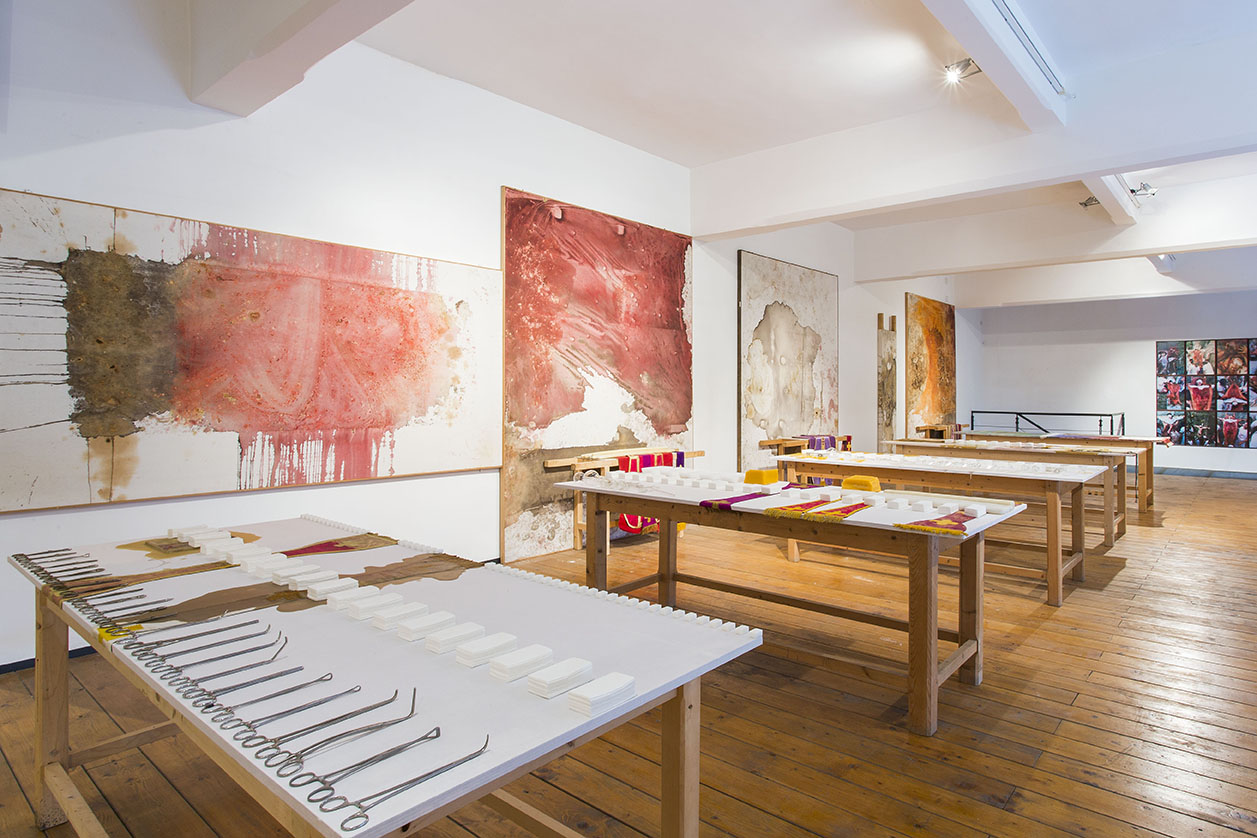 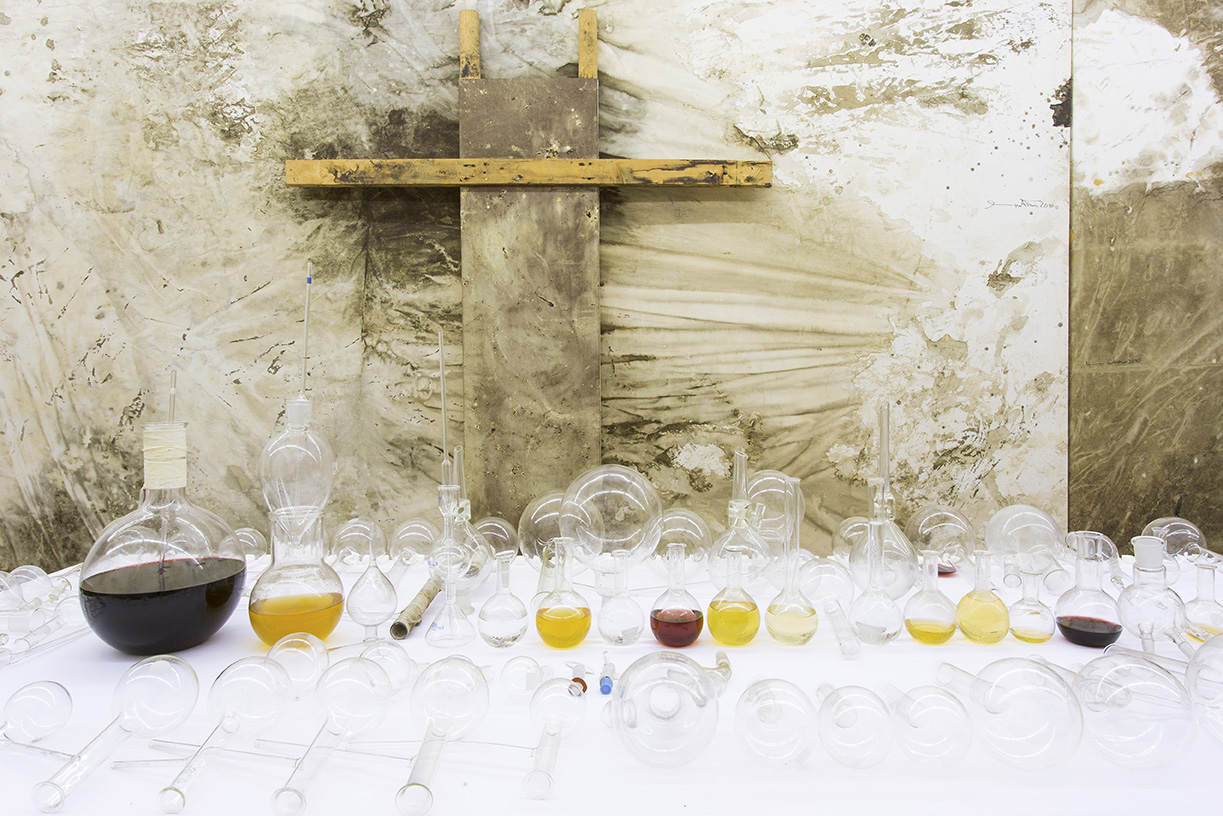