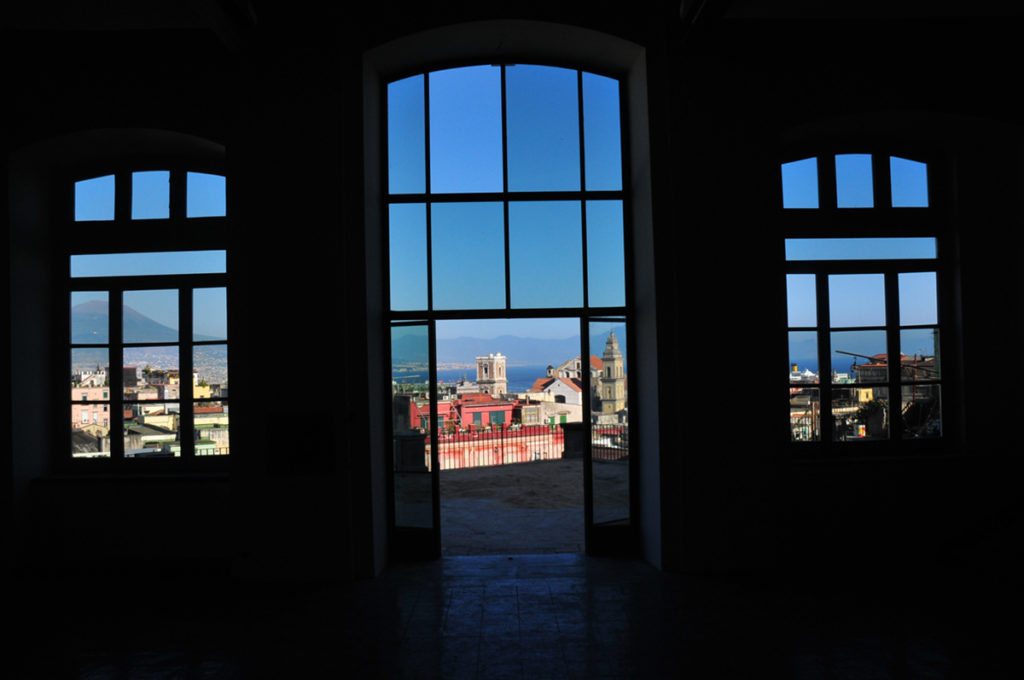 The first biennial exhibition inaugurating the Museo Archivio Laboratorio per le Arti Contemporanee Hermann Nitsch aims to document the Austrian artist’s output with the backing of Giuseppe Morra at home and abroad, starting from the historic 45.aktion performed at Studio Morra in via Calabritto in 1974.
In addition to a large canvas from the 68.aktion held in Florence (1980), previously exhibited at Documenta 7, the main room of the museum houses a core works from the 108.lehraktion performed at the GAM in Rome. It was created in 2001 for the Tribù dell’arte II exhibition curated by Achille Bonito Oliva where the father of Viennese Actionism illustrated some of the basic elements of his theatre with practical examples. The key position of these wrecks in the economy of the exhibition is rather significant on a symbolic level because the idea of dedicating a museum space to Nitsch took shape in Giuseppe Morra’s mind during the action in Rome: “It was there that I understood I had to create something very special to reflect my boundless admiration for Nitsch”.
The installation of the series of black paintings from the 54.malaktion – created in August 2008 for the tunnel connecting the museum and the Library of Contemporary Arts – is designed to be permanent. Nitsch described this action as “an intrinsic exchange with matter […] the liquidity of the [black] paint is poured, splashed, and sprayed, mixing together on the canvas; the process is dynamic and ecstatic”. This visceral and direct relationship with matter is offset in an Apollonian counterpoint by the shelves in the central room (recuperated directly from the former power station and restored) where the laboratory of essences, flavours, and colours of the O. M. Theater is set up as an emblem of Nitsch’s love of alchemy and the technical apparatus that historically mediate the relationship between man and the taboos associated with the body. 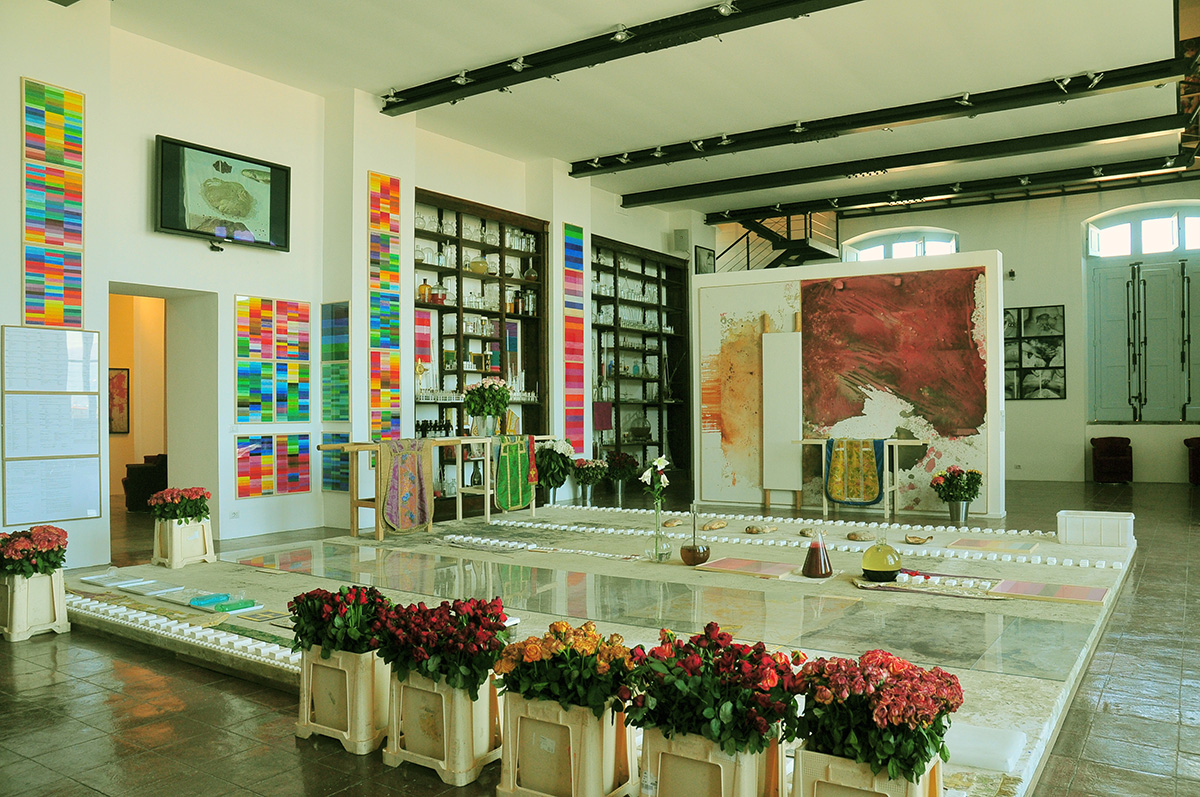 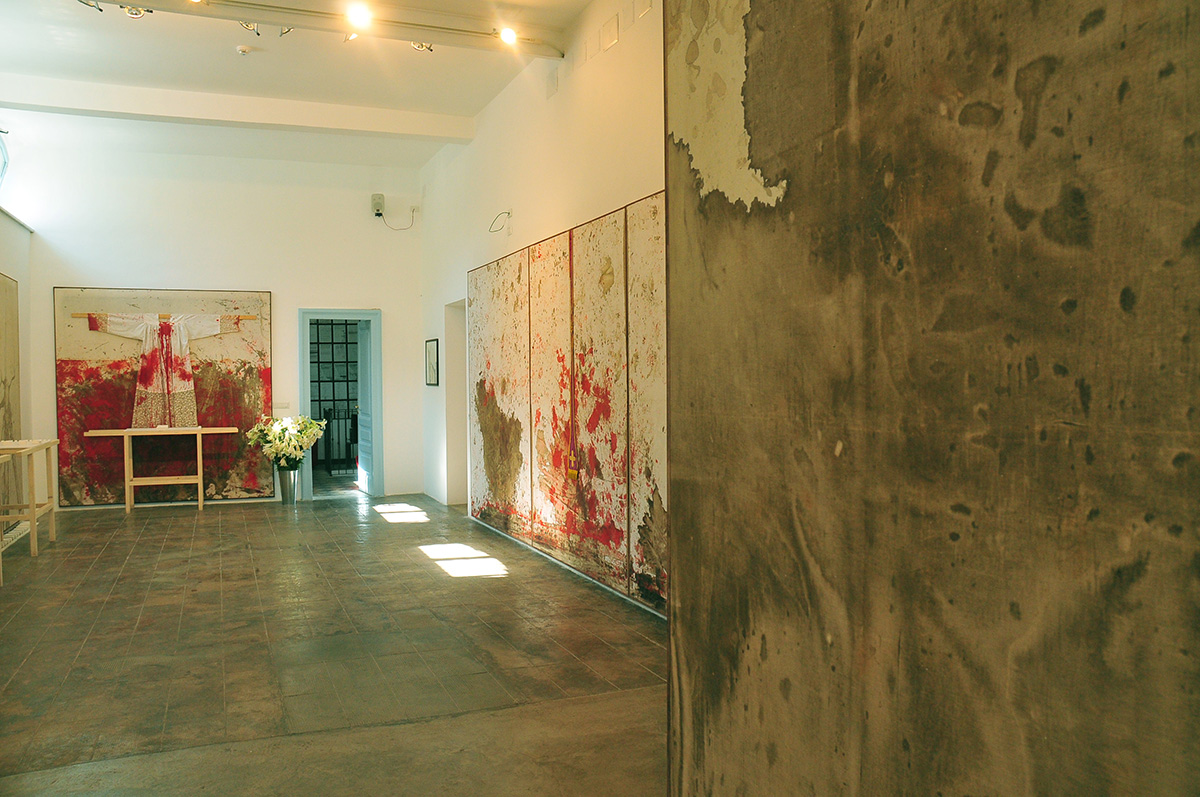 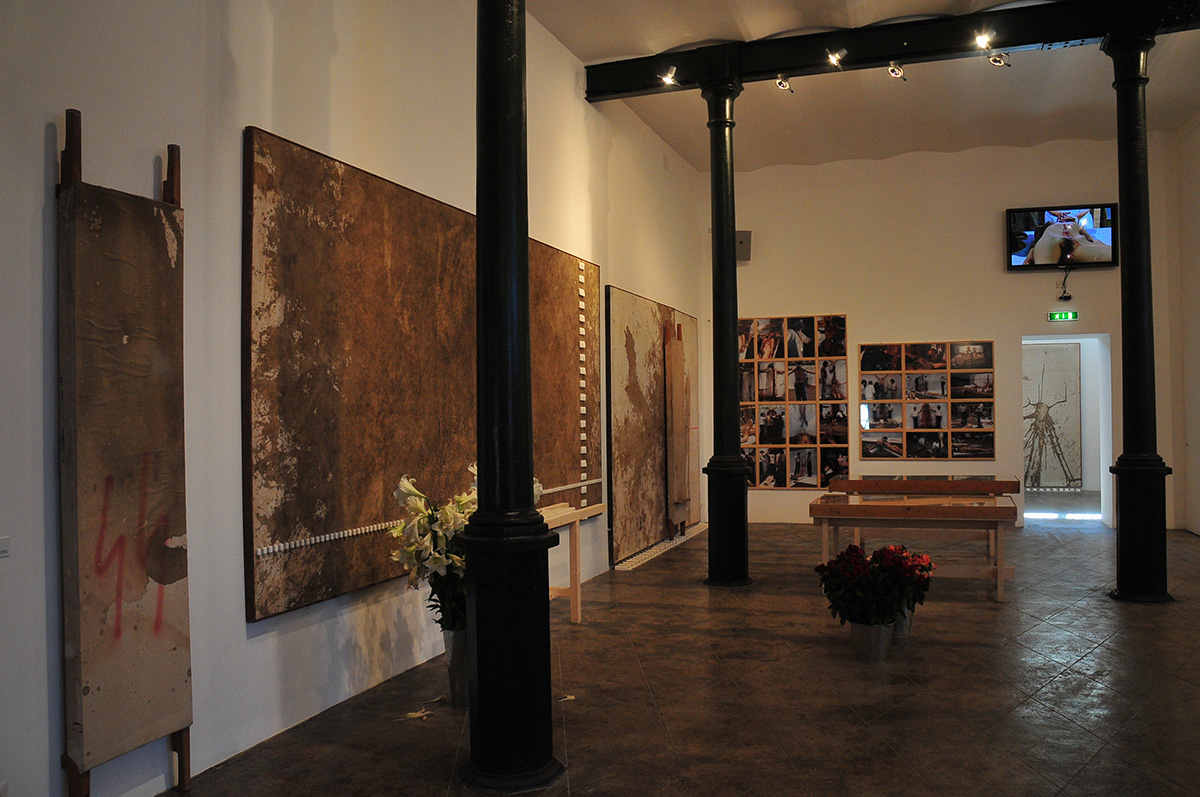 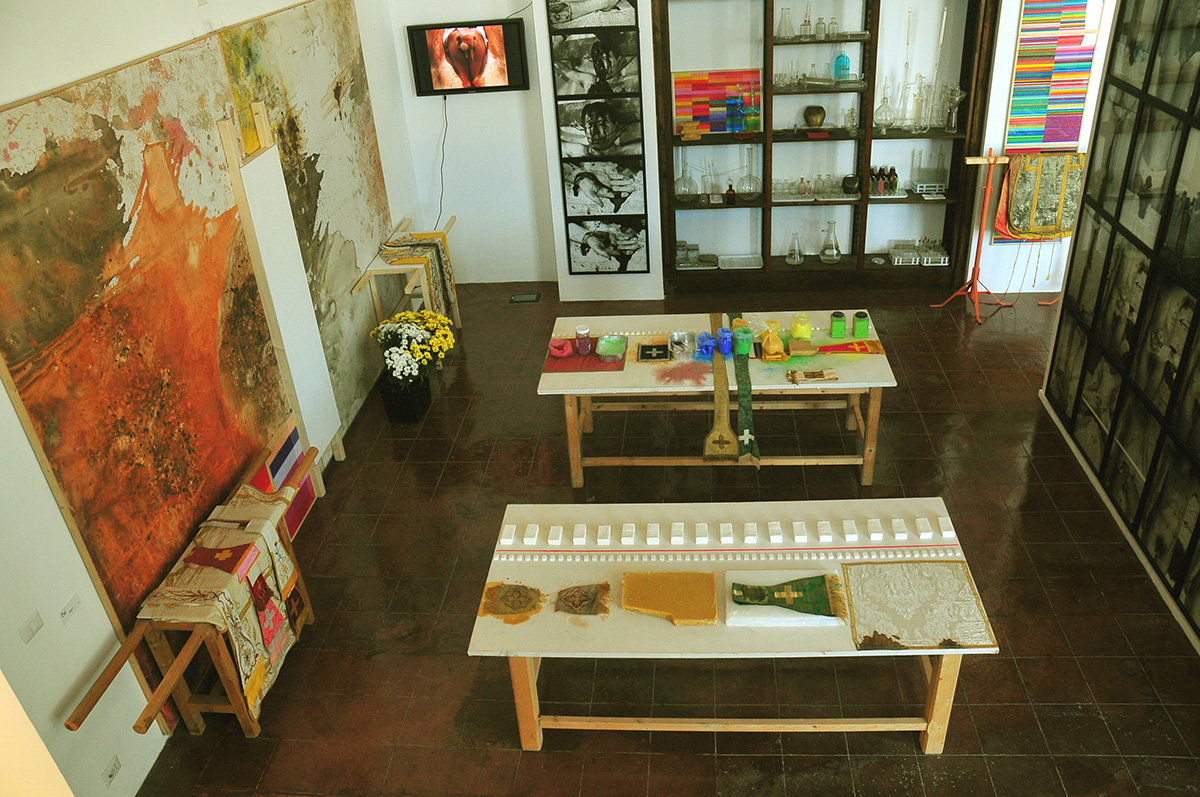 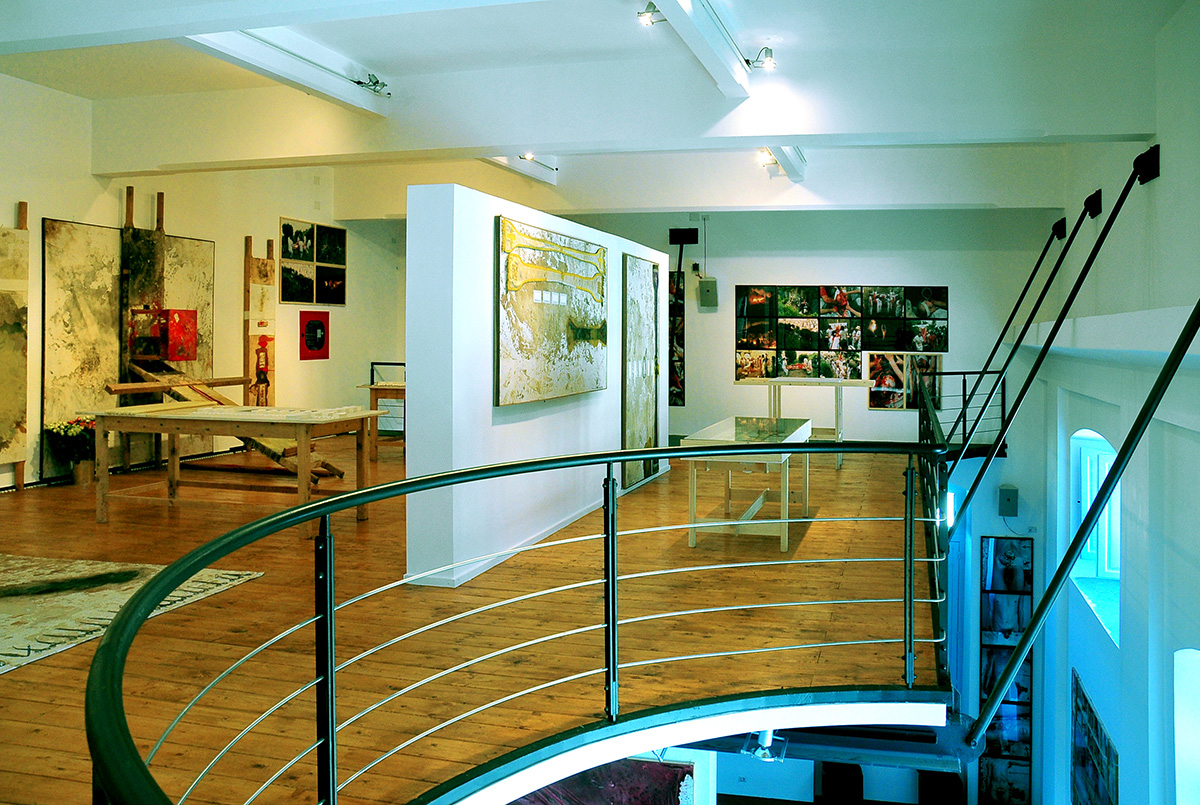 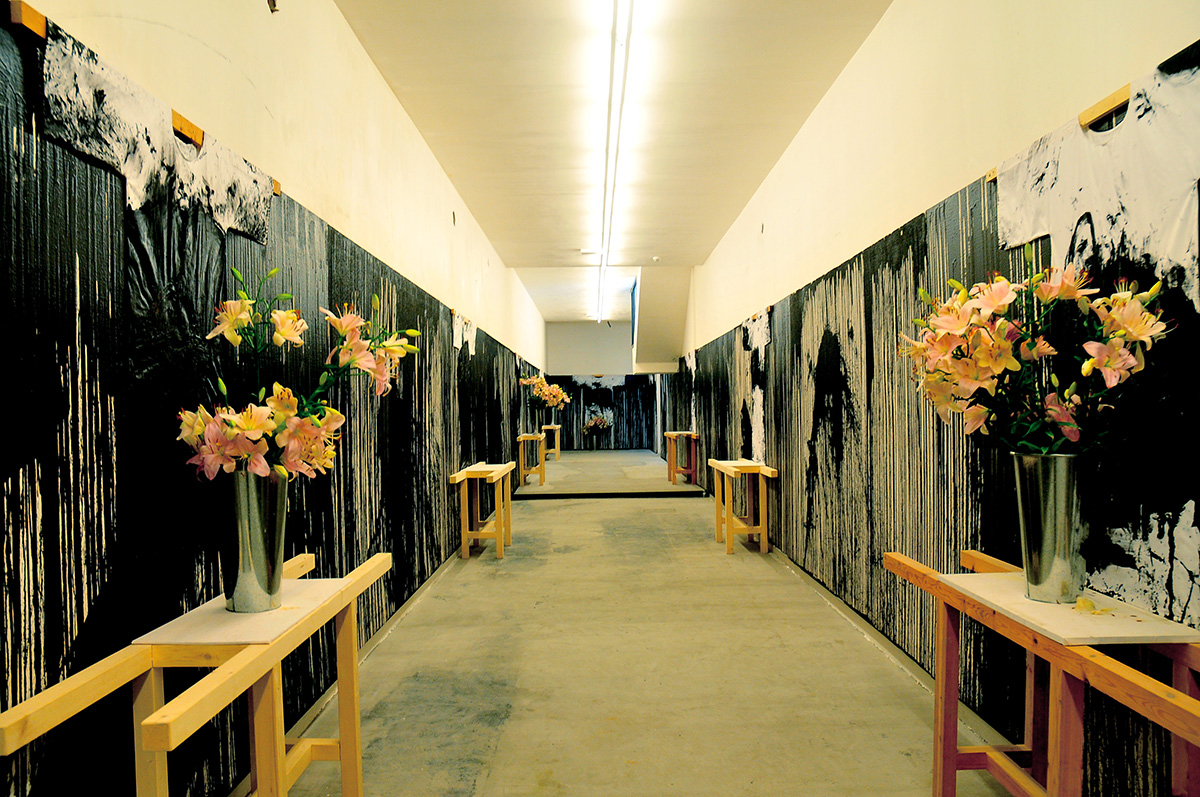